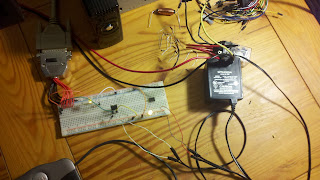 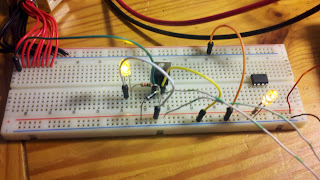 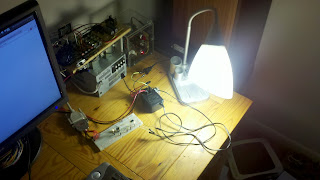 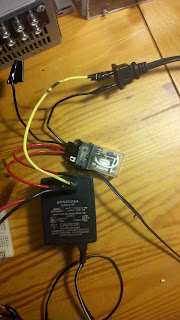 Also I promise I had this idea before this episode of the Big Bang Theory aired. WHAT A COINCIDENCE! This is what I felt like though. Then it was creepy when people started turning my lamp on and off.
Posted by Bryan at 1:04 PM 1 comment:

Progress on the "Turing" Slow Cooker

I have successfully managed to control the pins on a parallel (printer) port over the internets. I now document my efforts.

I already have this working on my personal desktop (which is apparently old enough to still have a parallel port in it?). For the purposes of writing this without flaws, I will be re-creating my work on the old Gateway in the kitchen, mostly using SSH. As of this writing, the computer is running Ubuntu 12.04 with LXDE.

First, I installed the apache2 webserver.

Next, I need to modify apache to run CGI scripts. This is much easier than everyone else on the internet seems to think. First, open /etc/apache2/apache2.conf with your favorite text editor and add the following line above
ErrorLog ${APACHE_LOG_DIR}/error.log:

Now it is time to get dirty. I used www.epanorama.net/circuits/parallel_output.html as a primer. It is full of spelling and grammar mistakes (and a few coding mistakes) but it's legible and helpful. Any way, the default web page that apache serves is /var/www/index.html. Mine looks like this:


The picture was to double-check to make sure apache was serving more than just index.html because at first I had problems serving the CGI scripts. Any way! Now we need to get those CGI scripts written. I use two, in this example, one to set all the data pins on the parallel port high (turn things on) and one to set them all low (turn them off). I started off in ~/programs with two C programs.

I compiled the programs:

Then I moved the programs to the /usr/sbin/ directory and gave them root access. This means that every time these programs are called they run as root automatically, even if the user who executes the programs does not have root privileges. This may seem like bad practice, but the reason for this is that writing to the parallel port requires root. This seems unavoidable. Just make sure the program won't get stuck in an infinite loop or it will be difficult to stop it. Any way...

The next step is to write CGI scrips that tell apache to run these two programs. They will be placed in the /usr/lib/cgi-bin/ directory. There are two buttons in this example, so there are two CGI scripts:

That's all! Again, credit where credit is due, most of the pages came from http://www.epanorama.net/circuits/parallel_output.html#webcontrol, and I modified the rest to suit my needs. This blog is primarily a way that I can keep track of what I do, and that is what I have done. Hooray science!

A video of it in action:


UPDATE: Actually a lot of this code is messed up because it's almost impossible to post code with this blog publisher's web software. So if anyone REALLY WANTS the files, maybe I'll make them available for download from my server. Also. You'll need to make the .cgi files executable! This is important otherwise you'll get a "INTERNAL SERVER ERROR!!!!!11" error when you try to run this. Do sudo chmod +x on the files and you'll be fine.
Posted by Bryan at 5:44 PM 1 comment:

The iPod finally gave up all the way. The screen still works but it doesn't play audio even if it's cold. As a stop-gap in the awesomeness that is fridge speakers, I had been using the "brypod" to play the fridge music, but I wanted that back for listening to music in other places. So I took the old Gateway computer I have, put a fun version of Linux on it, and made it play the music in the fridge. As a bonus: This computer also has a parallel port (a consequence of it being about 12 years old) which I will eventually use to control other things in the kitchen over the internet, such as the slow cooker. This is how I did it!

First! I downloaded the Ubuntu 12.04 x86 (32-bit) alternate desktop installer and burned it to a CD-RW and used that to install Ubuntu to the Gateway. This led to a problem that is becoming worse and worse with Ubuntu: despite having an "alternate installer" for old computers that don't have enough system resources to run the GUI, it's either impossible or very difficult to boot it to a command-line interface once it is installed. To me, this seems to defeat the purpose of having an alternate installer, but I also don't claim to be any sort of Linux expert. But any way! I spent about two hours coaxing the resource hog of a GUI into a terminal window so I could do something useful.

This installed a new GUI called LXDE which is extremely efficient and light-weight (unlike GNOME/Unity), without being downright unusable and terrible (unlike Fluxbox). After logging out and logging in to my LXDE session, I was able to actually use the computer.

This installed all the system updates as well as the tools I will be using on this computer:
I needed to configure the remote desktop software to start automatically at boot.

It is necessary to have a password. Next: I went to ~/.config/autostart and created a shortcut named X11VNC.desktop. (It is necessary to create the autostart directory if it does not exist already.) The file should look like this:

The next step is to configure the login options:
sudo nano /etc/lightdm/lightdm.conf

Now I need to configure the computer to automatically log in to an LXDE session when it starts up, so I don't have to type in a user name and password. I changed the lightdm.conf file from this:

The next step is to install folder sharing software (samba) so I can easily drag and drop music to the computer for my refrigerator listening pleasure. I decided to share the Music folder (~/Music) over the network. (I could have used SSH to do this, but it's a lot easier to drag-and-drop).

Once all the music I wanted was on the computer, I moved all the .mp3 files to one folder and created an .m3u playlist:

This creates a file called ~/Music/Music.m3u. The final step is to tell the computer to start VLC when it boots, AND play this playlist file when it starts the program, AND turn on repeat and shuffle. This was accomplished by making a file called vlc.desktop and placing it in the autostart folder.

That's it! Now the computer plays fridge music, is accessible remotely by VNC, SSH, and Samba, and is ready to start controlling things in the kitchen over the internets!
Posted by Bryan at 11:01 AM No comments: