A boring one... but whatever.

So I used to be a Windows user in my lesser days. Any way, two years have gone by since I switched full-time to Ubuntu, I haven't found a replacement for Quicken until now. (I was listening to the Moody Blues and it just came to me... Online banking! Yippie!) So here's what I did to install GNUCash in case I forget later.


We'll see if that worked later. But you get the idea. Any way, this is what I came up with. Here's a screenshot of the first thing the program did after I opened it! Almost nothing. About par for the course for an open-source program though. 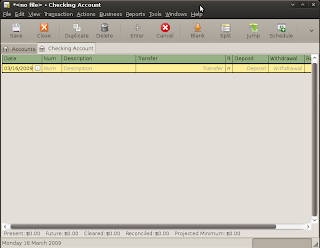 Not even a wizard to show me the ropes. After some Googling, I found the wizard, which wasn't actually much help. 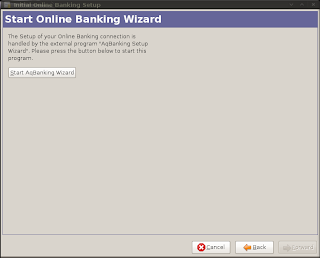 So yeah. The wizard wasn't very self-explanatory. I used this Wiki and this blog of all necessary banking information and numbers and such to find the necessary information on my bank, because apparently BB&T isn't a large enough bank to be listed on that wiki, and because this program isn't as intuative as Quicken and has all the monotonous banking numbers built in already. Whatever. Google helps.

After plugging all the numbers in and then hitting the "Get Accounts" button on the "User Configuration" tab of the setup wizard, I think I'm good to go.

I'm not good to go yet. Something isn't jiving and it's too late to fix. Peace out.
Posted by Bryan at 6:53 PM