Everyone needs a project that gets them started with a new technology, but I'm a little late to the party on this one. It seems like everyone is throwing lithium batteries in their projects, but I've never really gotten around to playing with one. They have really finicky charging requirements, which can result in fire or explosion if they're not met. But the power density in them is great, and assuming the charging is going well, they last for a really long time. Anyway! I found this rechargeable flashlight laying around the house, but the battery wouldn't hold a charge for longer than a minute. Time to replace the battery! 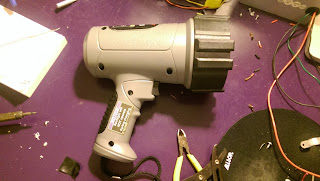 After getting the case apart, I found this little guy in this great big enclosure: 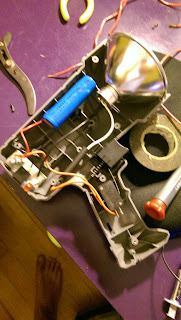 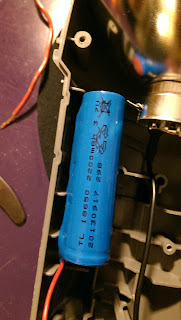 It's a lithium ion battery, which I haven't ever worked with. But hey, how hard could it be? For this project I'll be soldering directly to some new batteries, and lithium batteries can get a little unstable so I took the necessary precautions. 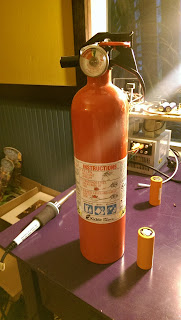 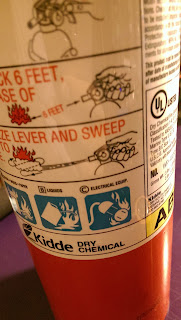 It's great for use on electrical fires! Any way, the old battery was only 2200 mAh, which I decided (relatively arbitrarily) was too small. So I found some (slightly larger) 3500 mAh batteries on Amazon. 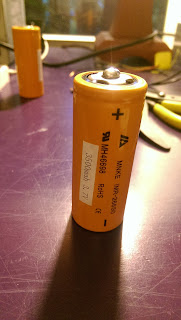 I had to solder leads directly to each terminal of the batteries. This is no joke, as overheating a lithium battery can result in fire and/or explosion. I used some tape rolls to keep the batteries upright for this delicate procedure. 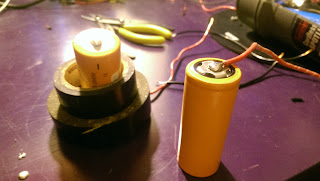 Basically, I heated up a bunch of solder on the iron and let it drip onto the battery terminal. I sanded down the terminals so they were roughed up, and surprisingly this procedure worked without heating the cells and damaging them. With all the wires on the batteries taped down so they don't get loose, I tied them in to the flashlight and its internal charging circuit. 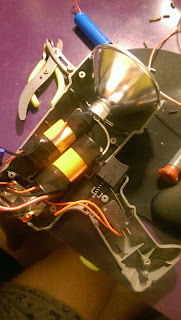 Oh, did I mention that the package from Amazon had two batteries in it? Might as well use both and get that weak, sad 2200 mAh up to 7200 mAh. I haven't tested the charging circuit on the increased capacity yet, but I assume it will work OK. If not, it'll be on my concrete patio for the first few charging cycles. Just in case. 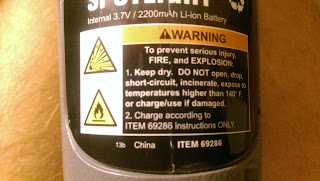