Solar Power for the Truck

I've always wanted to play around with a solar panel large enough to do something useful. Since I occasionally drive my truck well into the middle of nowhere, running some of the electronics in it (the stereo, the radio equipment, or the inverter) off of a solar panel seemed possible, but as a secondary goal I also decided I would like for the solar panel to run the cabin fans during particularly hot days to keep the heat manageable (I live in South Florida). Most of what I have done up to this point is proof-of-concept, and I am not planning on having this particular panel permanently attached to my truck.

As an electrical engineer in the power industry, I must start this with a disclaimer: my goal is NOT to offset any of the fossil fuels used in my truck with solar. From my experience, there is a pervasive belief that solar photovoltaics are much more practical than they really are. However, to put it in perspective, to even offset 20% of the power my truck's engine normally produces, the solar panel would have to be around 3,000 square feet. My engineering opinion in a nutshell is that energy from solar photovoltaic is useful in remote, sunny areas, but solar thermal should be used for any sort of large-scale power production.

Nevertheless! I found a 50-watt panel for dirt cheap that should work pretty well for what I want to do: essentially turn my truck into a portable battery that will be able to run the electronics worry-free if it runs out of gas. 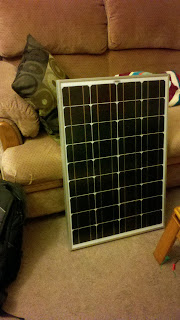 When I first started this, I thought, "Surely I can tie a solar panel to my truck's electrical system. Shouldn't take more than a week to build a charge controller!" So here I am, two months later, with the finished product. The theme of the day is "how much I hate programming" which, as anyone who knows me will attest to, is "a lot". Sure, I could have just bought a charge controller, but what fun would that be? But I also wanted the ability to add additional functionality, and I would like for the Arduino will eventually expand its programming to include solar tracking, so it keeps my options open.

Another thing that I would like to point out is that I will be wiring the panel (via the controller) essentially straight to the battery, rather than directly to individual loads in the truck. There are two main reasons for this. First, it greatly simplifies the design and the work involved. Second, many things need a very smooth, constant power flow, which a solar panel like this simply cannot provide. When all of the energy is sent to the battery first, the battery acts as a sort of capacitor, storing and smoothing out the erratic energy from the panel so it can be used safely and efficiently by any device in the truck. 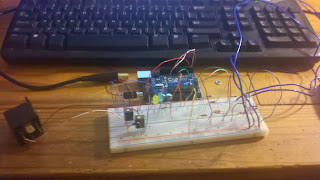 The first step, however, was to make sure that the power from the panel didn't overwhelm the controller. The panel produces 20V open-circuit, which may not harm the microcontroller immediately, but may degrade it over time. I stuck a 12V regulator (with heat sink) in the circuit to help the Arduino out a little bit. The other chip is the transistor that will drive the relay that will control when the solar panel delivers power to the battery in the truck.

The battery can be damaged if it is over- or under-charged, so the general idea is to measure the voltage at the panel and at the battery, compare the two values, and then have the microcontroller decide if the battery needs help from the panel. The voltage at each point was sent through a voltage divider to get them both down from the 0-20V range they are at normally to the 0-5V range that the Arduino likes. I chose 12.4 volts as the "low" point for the battery, where the panel will send energy to the battery (provided there is enough sunlight) and 14.4 volts as the "high" point where the microcontroller will disconnect the panel to keep from damaging the battery. 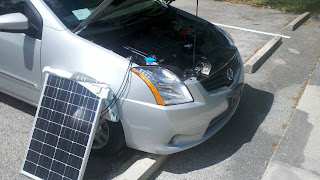 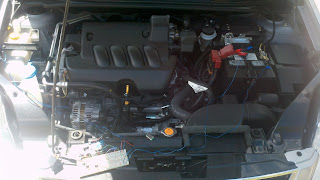 That is a rental Sentra. Not because I was afraid to hook this up to my own vehicle, but because my truck decided to randomly blow its rear main seal and spew crank and gear oil all over creation. But we persevere! The tests on the Sentra were promising, but the programming needed some tweaking. I also found out that the controller behaves erratically when it is not hooked up to the battery first.

This video shows some of the action from testing it on my homemade bench power supply (not pretty, but gets the job done):

Any way. On to putting it all together! Since I don't intend for this to be bulletproof or permanent, I put it together from stuff I had lying around. If you have read my blog extensively, you will notice that the enclosure is from the remote kitchen light switch I built a long time ago. 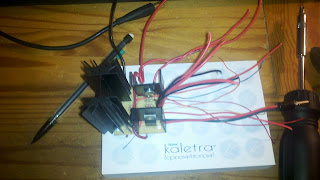 Building the circuitry. The large heat sink is for a Schottky diode. This prevents the battery from discharging back into the solar panel when there isn't any sunlight. Without the diode, the panel would behave as a resistive load in low-light conditions and drain the battery (and possibly damage the cells). This was more or less just a precaution though. Since the panel provides power to the microcontroller and associated circuitry directly, in low-light conditions one would assume that there wouldn't be enough energy to drive the relay. What I actually found out was that a surprisingly low amount of light is enough to turn everything on. Plus, since I'm an electrical engineer, plopping a precautionary diode in the circuit is much easier than doing any sort of programming, or trying to predict what the Arduino will do if it gets random spurts of power with a voltage less than 5V. 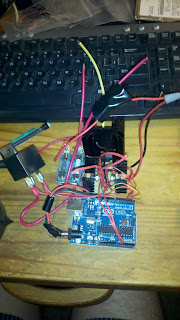 Addition of the relay and microcontroller, as well as a 10-amp main fuse (because I didn't have any smaller than 10 but greater than 5) and a 1-amp fuse to protect the Arduino and power transistor. 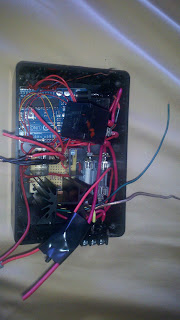 Preliminary layout in the enclosure. 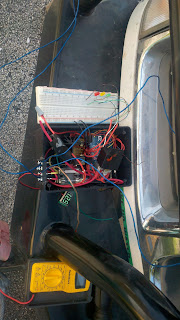 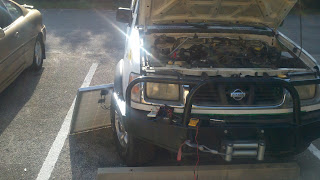 Testing on the truck this time. 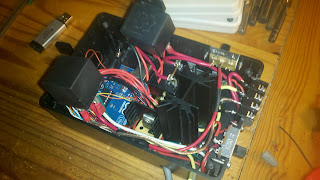 The second relay was added to control power delivery to the fans in the truck. It is a SPDT relay with the coil connected to the truck's ignition. When the truck turns on, the fans behave normally, and when the truck is turned off, the fans are connected directly to the panel. I was able to splice it in to the control circuitry in the truck with little issue. To further reiterate how little power solar panels produce for their size, this panel barely has enough energy to spin the cabin fans at their lowest setting in direct sunlight.

A second video illustrates the panel and controller being tested on the truck.

A rousing success! Next was to attach the LEDs somewhere where I could see them easily. I used CAT5 ethernet cable for this, and used the final twisted pair out of the set of four twisted pairs to hook up a reset button for the Arduino, just in case things got wily. 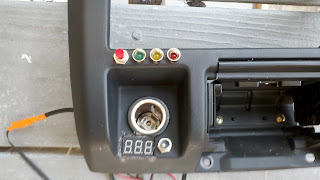 I drilled these into the trim around the stereo's head unit and the CB radio and soldered the CAT5 cable. I used a regular ethernet jack here as well to enable the trim to be removed easily. 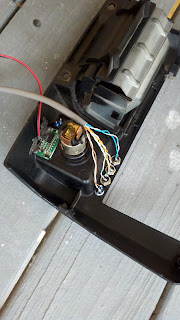 The red button is the reset for the Arduino. 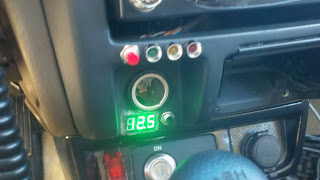 I also used this project as an excuse to add a voltmeter to the truck. The black button turns the voltmeter on if the truck is off, otherwise it turns on automatically when the truck does via a small 12V relay I wired to the ignition. The voltmeter will also be helpful when I go off road, in the event I drive through a river and the alternator fails. Not entirely out of the question. 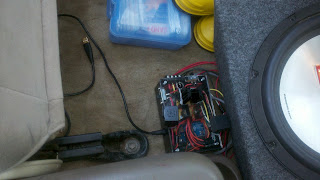 I stored the unit behind the passenger seat and ran all the wires under the center console. 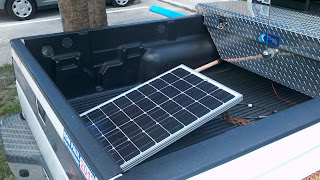 Propped up in the bed. The tailgate can be lowered if the sun is lower in the sky. 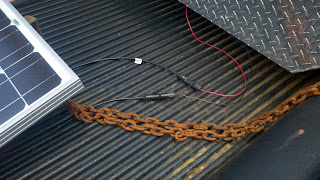 The chain is because, as I mentioned, I live in South Florida. This also shows the special weatherproof MC4 connectors that came with the solar panel.

This was installed in my truck for about two weeks and worked great! It didn't even start any fires. It does charge the battery much better than it runs the fans though, so if I want to do that better I'll have to upgrade. For the future! I plan on building a custom panel that will produce more power and mount to the top of the toolbox (so it doesn't always waste bed space). Optionally I could have both panels running in parallel for around 130 watts of solar power. The next things I am going to work on are a maximum power point tracking circuit and a solar tracking device. I'm worried that solar tracking will consume more power than it creates, but maybe I can think of a more efficient way to do it. We will see!
Posted by Bryan at 10:27 PM